Where does a superstar antioxidant vegetable intersect with a wacky winter costume party in northern Maine?  Why at the National Toboggan Championship in Camden, Maine of course. My team, The Blind Squirrels, competed in the event for the first time a few weeks ago and it was a blast. I would point out that this is the only national championship in which a competitor needs absolutely no skills or prior experiences in the sport. We were able to compete ….well… because really the only thing we had to do to be competitive was to not fall off the toboggan, which we accomplished beautifully.

This winter’s big blizzard occurred on Saturday of the weekend schedule and probably resulted in a smaller than normal field of entrants. Nevertheless, there were approximately 400 teams entered in the two, three and four person team events. 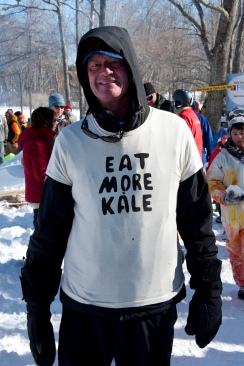 Eat More Kale is a web site for a guy in central Vermont who started a small business printing a few T-shirts promoting the local farming movement. His shirts became popular in the local farmer’s markets and he decided to apply for a trademark for the phrase. That’s when the trouble started. He received a Cease and Desist letter from Chick Fil A who has a slogan called “Eat mor Chikin”. This dispute has now blossomed into a national story as it has been written up by the NY Times, Huffington Post and virtually every other major press outlet in the country resulting in a significant increase in notoriety and business for the fledgling company.

The Blind Squirrels are (left to right) Frank Binder, Tom Cox, Sue Guletsky and our team Captain Dave Sessions. We finished about in the middle of the pack for the three person team event and finished 56 out of 210 competitors in the four person team event.  And….we finished first in the senior category!

The original chute was built in 1936 in this location. Over the years there have been several rebuilds of the chute with the current chute having been built in 1990. It is 400 ft. long and rises 70 ft. The fastest sleds reach peak speeds of 40mph.

King and his Jesters

For a lot of contestants the event is just an excuse to use their Halloween costumes for an extra day during the year. There were some very clever costumes and these guys were among them.

The Pineapple Express not only looked good, but they raced well. They finished 21st in the four person team competition (one of them is missing in the photo) 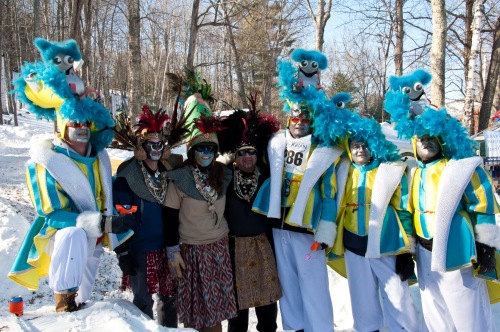 The Dutch National Team (in blue) and the Mayans had the two most extravagant outfits in the competition. One of the DNT members lives in Maine and his three friends fly to the event from the Netherlands each year.

Fun in the Chute

Some competitors regard the event as a serious competition and arrive at the site with a trailer load of equipment, wax, tools, and extra toboggans. Others come with little more than an old toboggan, a dream and a six-pack. Some dress up in costume, bring deck chairs and numerous six-packs and hope the competition doesn’t interrupt their fun.

This team was my pick for best get-up. Look at the make up, elaborate headgear, and jewelry!

This was a great family event and provided opportunities to photograph kids at play which is one of my favorite subjects.

These two young ones were working hard to build their own mini-chute.

Because of the big blizzard on Saturday, that day’s activities were cancelled and the event organizers had to deal with numerous scheduling issues involving teams coming from far away and the timing of the runs. They dealt with it well and even more impressive it didn’t seem to bother any of the contestants who, it seems were all able to go with the flow and have a great time. We’ll be back for the 2014 competition.