I can’t explain what happened at the Boston Marathon last week. It was a senseless act of madness that at least for me, defies explanation. I’ll leave the analysis to those who are far more articulate and erudite than me. Maybe it’s as simple as evil exists. One thing that was re-affirmed is that ordinary people do extraordinary things when fate thrusts them into a crisis. Undoubtedly lives were saved when people ran towards the bombs and the severely injured. As Mr. Rogers said “Look for the helpers”. They are always there.

Many have forecasted that next years marathon is likely to be bigger than ever; partly as a reaction to the events of this year but also because of the nature of the event. To some it’s an opportunity to test their endurance, fortitude and competitiveness, for others it’s the chance to cheer on Mom or Dad. Many use it as a vehicle to raise money or to give publicity to important causes.

I photographed the race from Wellesley. the approximate midpoint of the race and also the location of Scream Alley where hundreds of Wellesley co-eds cheer the runners while granting kisses. 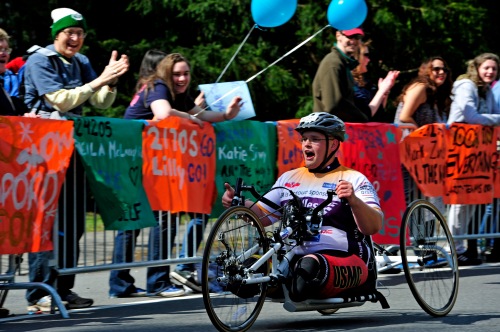 The wheelchair racers start the race earlier than all other participants and the fastest ones complete the race thirty minutes ahead of the fastest runners. This guy was yelling at the Wellesley co-eds (whose scream pitch was already at jet engine levels) to scream louder because he couldn’t hear them! 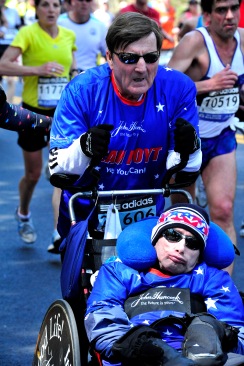 Dick Hoyt, 73 and Rick Hoyt, 51 are undoubtedly the most renown push/wheelchair team in the world. Rick was born with cerebral palsy and doctors encouraged the Hoyts to institutionalize Rick, informing them that he would be nothing more than a “vegetable”. Fortunately, Dick and his wife decided to keep Rick at home and treat him like a normal child. Rick went on to graduate from Boston University in 1993 with a degree in special education and later worked at Boston College in a computer lab helping to develop systems to aid in communication and other tasks for people with disabilities.

As of April 2013, the Hoyts had competed in 1,077 endurance events, including 70 marathons and six Ironman triathlons. They had run the Boston Marathon 30 times. Also adding to their list of achievements, Dick and Rick biked and ran across the U.S. in 1992, completing a full 3,735 miles in 45 days.

Paul Appleby and Gene Carter were one of four push/wheelchair teams in the race this year. Paul has cerebral palsy and he and Gene have completed eleven marathons and 89 road races in the past nine years. Prior to this years race Paul lost his Angel Flight (because of mechanical issues) which would have taken him, his father and his wheelchair to Boston. Once word filtered out into his Collierville, Tennessee community about the canceled flight, a parent with a special-needs child donated his frequent flier miles so that Paul and Bob Appleby could fly. FedEx, where Carter works in Collierville, also shipped Paul’s racing chair and other accessories to Boston for free. In response to the co-eds cheering him on, Paul kept yelling “God Bless You” over and over again.

Noah Zack 30, has cerebral palsy and mental retardation and is one of many who receive help from the Noah’s Ark Foundation. The foundation (named in his honor) and formed in 1994, is dedicated to providing subsidies to residential homes and day-habilitation programs for individuals with severe disabilities. Each of the six people accompanying him pushed him for a portion of the race. 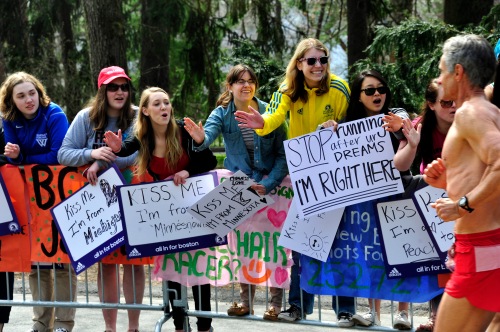 This Wellesley section of the race is about a quarter-mile long and completely filled with co-eds encouraging the race participants by cheering loudly, slapping hands and occasionally getting a kiss.

This year the race occurred on April 15th which is of course, the nation’s tax filing deadline.

By this point in the race the world’s best marathoners have started to sort themselves out, form a leading pack and usually run together until the final third of the race. This year’s race was won by Ethiopia’s Lelisa Desisa who you can see in the middle of this image. East African runners have dominated worldwide marathons for the last twenty years. Jason Hartmann (far left in the image), who finished fourth for the second year in a row, was one of three Americans finishing in the top ten. His time was a little over two minutes behind the winner.

This is the women’s lead pack of world-class runners. Occasionally (more frequently than the men) certain women will run the first half very fast in an attempt to get way out in front and make it difficult for the lead pack to catch them. It almost never works as the lead rabbits get tired in the last half of the race and get caught by the pack. Kenya’s Rita Jeptoo (second from left) won this years race with the America’s Shalane Flanagan (third from left) and Kara Goucher finishing fourth and sixth respectively. 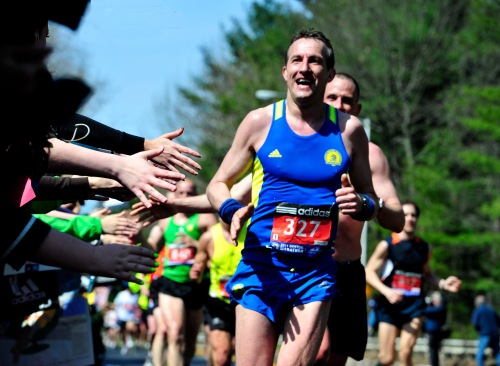 Although not done by the lead runners, many of the 26,000 runners slap the hands of the Wellesley co-eds and some who are not particularly concerned about their times will stop and get a kiss. 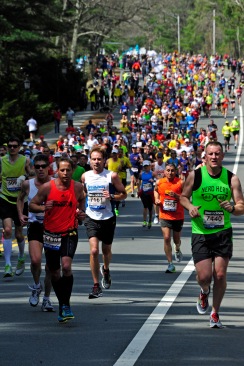 In the hours after the wheelchair and world-class competitors have finished the race, thousands of runners still clog the racecourse in the hope of establishing a personal best time or to generate additional contributions to the charity for which they are running. 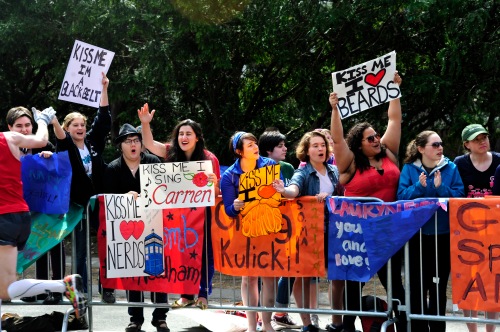 Wild about the Runners!

As you might expect in a field of 26,000 runners, some take a lighthearted approach to the race. In addition to this guy, I saw Abe Lincoln, Wonderwoman (can’t figure out why she didn’t win!), numerous ballerinas and clowns, several men in full three-piece suits and a juggler who juggled three balls for the entire race. 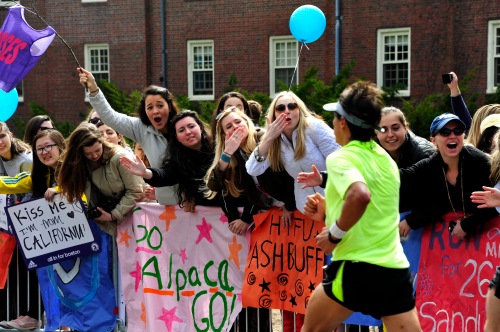 5 Responses to The Marathon