As the capital city of Tuscany, Florence was the center of medieval European trade and finance and is generally considered the birthplace of the Renaissance. Many of the world’s towering artistic giants walked Florentine streets and the city remains a magnet for art lovers the world over. The names are legendary…Michaelangelo, Leonardo, Dante, Lorenzo di Medici, Botticelli, and Filippo Brunelleschi. 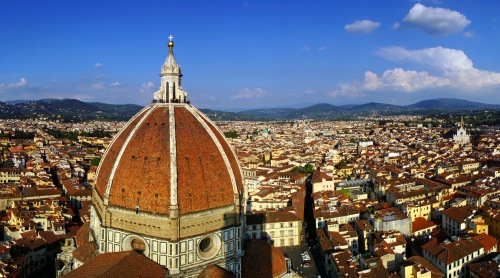 In 1418, Brunelleschi was commissioned to design and construct the dome (Duomo) of the unfinished Gothic Cathedral of Florence. The dome is actually two domes on top of one another entirely constructed from brick. Even today, the actual method of construction is a mystery and several noted Italian architects are constructing a small-scale version of the dome in an attempt to replicate the methods used in the 15th century.

Neptune and the Palazzo Vecchio

The Fountain of Neptune is situated on the Piazza della Signoria in front of the Palazzo Vecchio and was commissioned in 1565 to celebrate the wedding of Francesco de’Medici to Johanna of Austria. It is the work of the sculptor Bartolomeo Ammannati.

The Palazzo Vecchio was the 16th century home of the Medici clan and is now the Florence town hall.

How often do you see a group of Nuns staring at a naked man?  Only in Italy!

Rape of the Sabine Women

The main Piazza in Florence is the unrivaled showplace for some of the finest sculptures ever chiseled out of marble. These nonplussed peopled are sitting beneath Giambologna’s Rape of the Sabine Women which was commissioned by the Medicis and carved out of a single block of marble in 1583. No other place in the world contains such a breathtaking array of original work by legendary artists and provides such a degree of free public accessibility.

The Rennaissance blossomed in Florence partly as a result of the Medici’s love and funding of public art which began to celebrate the human form. In the image above you can see a replica of Michaelangelo’s David (on the left) which marks the entrance to the Medici’s palace. The original David, which is now housed in the Accademia Museum, occupied this public space for almost two hundred years. 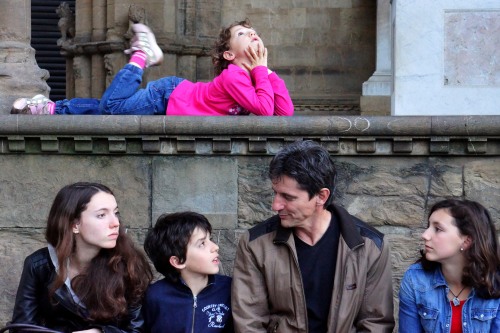 She soon wandered back to her family and showed her complete boredom with public art. 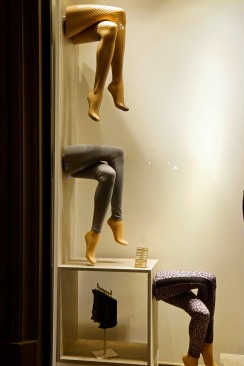 Led perhaps, by Lorenzo the Magnificent, the Medicis made dressing up an art form during the renaissance period. Fast forward to today and many of the worlds most noted fashion designers are rooted in Florence. Starting fledgling businesses in the city, Gucci, Pucci and Ferragamo  have all built worldwide fashion empires.

Begun in 1294 and finished in 1442, The Basilica di Santa Croce (Basilica of the Holy Cross) is situated on the Piazza di Santa Croce. It is the burial place of some of the most illustrious Italians, such as Michelangelo, Galileo, Machiavelli, Foscolo, Gentile and Rossini, thus it is known also as the Temple of the Italian Glories. (Wikopedia)

Michaelangelo’s tomb is right next to Dante’s tomb (although Dante is actually interred somewhere else). 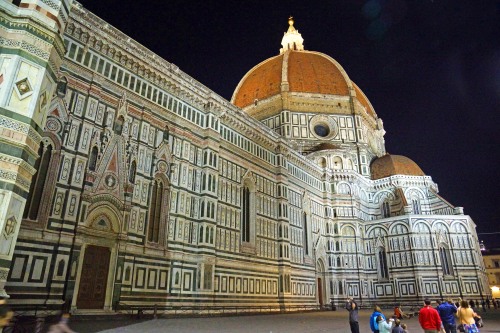 Dancing in the Street

This vivacious little burst of energy began dancing to a radio playing in the Piazza and attracted every cell phone camera in the area.

Thank you for reading my latest blog entry. If you thought it was worthy of your time and you hadn’t already done so, please take the opportunity to subscribe by clicking the “Follow” button on the right side of the page. You will receive an email asking you to confirm your subscription. Also, you can share this blog entry on your Facebook page by clicking the share button below or you can email it to folks by clicking on the “Email” button. Frank Shrewsbury, MA