During my recent January visit to Death Valley I observed to a local that very few visitors were in the park and that I found this surprising given the moderate winter temperatures (daytime in the 60’s and 70’s). I ventured that summer would be a terrible time to visit because of the well-known record high heat indexes. “Au Contraire” said the local….summer is the park’s high season and the valley is filled with foreign tourists that the park’s rangers recognize as “Heat Tourists”. These are people who want to experience some of the highest temperatures on earth for themselves, even though they can’t actually spend a great deal of time outside in the furnace-like conditions.

This was my first visit to Death Valley National Park and it kindled fond memories of watching “Death Valley Days” in black & white on our first family television in the 1950s. It was sponsored by Twenty Mule Team Borax which was a popular clothes detergent at the time (Can you imagine Millennials buying a cleaning product made of borax today?). Those “Mad Men” advertising folks were right on the money…….huge amounts of borax were mined in Death Valley in the early and mid twentieth century and in the early days, the borax was indeed carried out of the mines to processing centers in wagons pulled by teams of twenty mules.

Furnace Creek is the locale where earth’s highest recorded temperature occurred in 1913….134 degrees. Average day time highs in the summer are 116 degrees.

I expected that most of the valley floor would be covered with sand dunes but the dunes cover only a small portion of the valley. 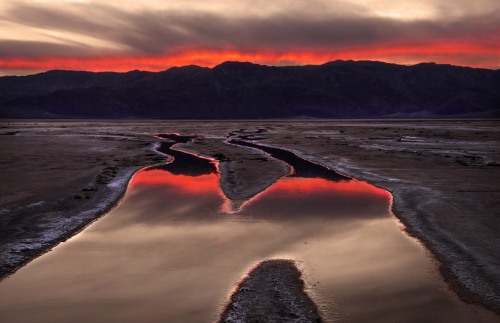 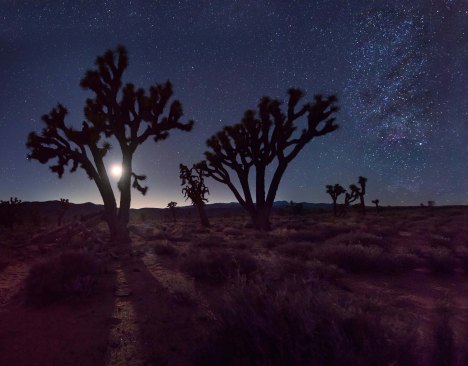 In addition to Death Valley, Death Valley National Park encompasses a wonderful variety of different landscapes and environments including other smaller valleys and various mountain ranges. These Joshua trees are in the park but about 10 miles from Death Valley itself.

I shot this on one of the scenic mountain peaks surrounding Death Valley just as the sun was rising. If you look carefully, you can see the various layers of mountains and color.

Sunrise Across The Dunes

One of the enduring lessons in photography is during those magic moments when the light is special….look around! As I was taking the “Layers” photograph above, the dunes behind me were being lit up by the sunrise. This kind of scene lasts less than five minutes because the rising sun gradually fills in the shadows and the drama disappears. Lucky I turned around to see what was happening behind me!

To get a sense of scale…notice the figure walking on top of the dunes in the upper left portion of the image.
Thank you for reading my latest blog entry. If you thought it was worthy of your time and you hadn’t already done so, please take the opportunity to subscribe by clicking the “Follow” button on the right side of the page. You will receive an email asking you to confirm your subscription. Also, you can share this blog entry on your Facebook page by clicking the share button below or you can email it to folks by clicking on the “Email” button.